20 reviews
$169.99
Made from one of the strongest metals known to man, inlaid with gorgeous guitar string, and fitted with a polished interior, this wedding band is the one that belongs on your hand. Sculpted from Tungsten Carbide that has been crafted with dark notes and hammered exterior, this ring is durable and beautifully withstands the rigorous lifestyles of active men.


Each ring is delivered in a custom wood box.

We loved the ring! It arrived in two days, beautifully crafted, minimal shipping packaging, which is a plus! The box it came in was perfect for a men’s ring. It was a Christmas gift, and I was unable to obtain his ring size discretely. Seeing as how I live with Sherlock Holmes, even the suggested tying a string around his finger while he slept was not an option, also he is an aggressive sleeper, and it wasn’t worth the risk. I just dropped it in the mail to return it, as it did not fit, and apparently getting his finger sized is the most difficult thing I’ve ever asked him to do (heavy eye rolling). So we are returning until he has gotten sized properly. The return policy is super cut and dry and painless. I can not reiterate enough how beautiful the ring is and how satisfied we were with it! The only reason we are returning is due to not choosing the right size! I would highly recommend Rings By Lux and would absolutely be ordering from them again! 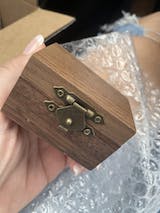 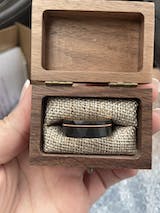 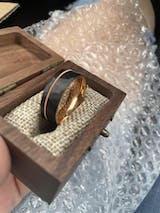 I haven’t actually given this to my boyfriend yet but it’s part of his Christmas gift! However, it’s is beautifully made and came in a small box that is the perfect size. The ring was better than I expected and I can’t wait to give it to him!

I bought this ring as a wedding ring for my soon to be husband. I should have never trusted himself to size himself, and the first ring was slightly too big. The exchange process was simple and without fuss I was sent back the correct size.
The ring has a heavy feel and it’s classy yet has a rugged feel. It feels like it will last the rest of time.
I will be recommending to my friends!

I was so pleased when my order arrived. The box the ring came in was a nice added surprise. It is a very well-crafted, solid, nicely weighted ring. Even better than I could have imagined! And shipping was super fast as well! Highly recommend! 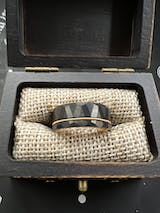 We are so impressed with the ring I got my husband! The quality is great and the ring is beautiful. Shipping was quick. Thank You!